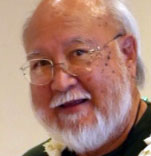 Form is everything. The second premise is: the shape on the inside of the bowl should match the outside of the bowl. But what is good form? My take is four decades as a licensed architect has given me the tools and ability to discern shapes that are good and pleasing to the eye. That being said, I am human, and some pieces turn out better than others. In choosing to concentrate on the Hawaiian calabash form, I have taken on a difficult task, as the calabash form seems quite simple but in practice is very difficult to execute well. I have been very fortunate to be recognized with a first place award for a calabash bowl, in the category Turning with Emphasis on Form in Hawaii’s Wood Show, 2016.” – David Chung

Born in Moanalua Gardens and raised in the Kalihi neighborhood of Honolulu, David transferred from the pre-architecture program at the University of Hawaii and received his Bachelor of Architecture degree from Miami University in Oxford, Ohio in 1967.

He did military service as a Civil Engineering officer at Carswell Air Force Base in Ft. Worth, Texas. In 1971 after discharge he and wife Johanna, born in Indianapolis, returned to Hawaii. They have one son and currently have a home in Kaneohe.

After apprenticeship in various firms became a registered architect in 1973. In the late 80s David got involved in woodworking and participated in several craft fairs selling wooden clocks he designed and built under the name ArchiCloocks.

In 2002, he tried woodturning and has been at it ever since. He has been to several national woodturning symposiums and is an active member of the Honolulu Woodturners club.